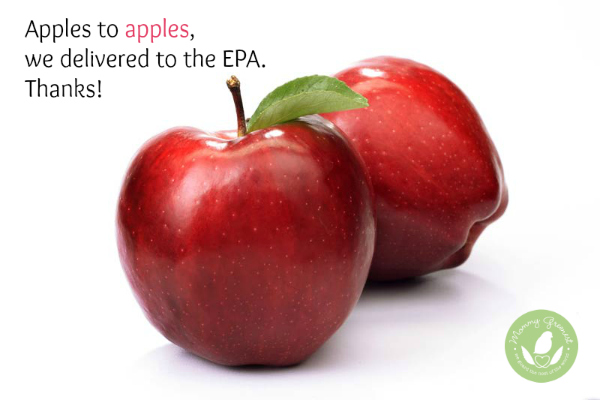 Last week, Mommy Greenest delivered 661 signatures in support of our Poison Apple petition. The letter that we sent to Gina McCarthy is below. Our petition, which focused on better regulating toxic chemical pesticides on apples, is just part of a larger movement. Similar actions from amazing organizations such as the Center for Food Safety recently helped to end the use of antibiotics in organic apple and pear production. Antibiotics in organic? I was surprised, too.

If you want to avoid toxic chemical pesticides and antibiotics on apples right now, organic is the only way to go. Here’s what the CFS had to say about it:

More and more people are beginning to understand that what we put on our food, land, and water ends up in our bodies. Organically grown food is the only food legally mandated to safeguard human health, animal welfare and the environment. That’s why organic is the best choice for people wanting to eat foods grown without the use of toxic, synthetic chemicals; sewage sludge; genetic engineering; growth hormones or irradiation. Although consumers also expect organic to be free of antibiotics, USDA temporarily allowed them in apple and pear orchards to fight the destructive fire blight problem that attacks tree blossoms, limbs and shoots. But last week that all changed.

The Center for Food Safety delivered more than 50,000 signatures to the National Organic Standard Board to ban the antibiotic streptomycin from organic production. Today, all uses of antibiotics in organic have been completely eliminated! The tide is definitely turning in terms of consumer awareness.

Go team! Now, the choice between organic and conventional produce it truly clear-cut. That’s why we hope the EPA will listen, when it comes to our poison apple petition. Because if you want to avoid toxic chemical pesticides and antibiotics right now, organic is the only way to go.

Here’s the letter we delivered, and I for one can’t wait to hear the response. Thanks for your help in making an impact!

On behalf of myself, and the 661 signers of the Mommy Greenest Poison Apple Petition, I’m asking you to re-assess the safety of diphenylamine, a pesticide that’s banned in the European Union, but not in the United States.

I grew up on “an apple a day keeps the doctor away.” My most vivid grade-school history lesson centered around Johnny Appleseed. I truly believe that something can be “as American as apple pie.”

But when I found out that 80% of apples are coated with a pesticide that’s banned in Europe because it could be carcinogenic, I worried that what I serve to my three children as a healthy snack isn’t safe any more.

European regulators are worried too—so worried about the connection between diphenylamine and nitrosamines, a family of potent cancer-causing chemicals, that they banned the use of DPA on apples and pears in June 2012. Then, in March of this year, they reduced the allowable level of DPA on imports to .1 part per million—effectively banning the export of American apples to Europe.

As you know, in the United States, farmers treat conventionally-grown apples with the EU-banned pesticide—commonly known as DPA—after harvest to prevent blackening or browning of fruit skin during cold storage. The average concentration of DPA on U.S. apples is about .42 parts per million.

Under the federal Food Quality Protection Act, the EPA is supposed to conduct a scientific assessment of pesticides every 15 years—but it hasn’t assessed DPA since the late 1990s.

Tests of raw apples conducted by the U.S. Department of Agriculture in 2010—the most recent year for which data is available—found DPA on 80% of apples tested, more often and at greater concentrations than other pesticide residues. They also found it in apple juice and applesauce.

And Americans eat nearly 10 pounds per person of fresh apples every year.

Gina, why should Americans eat apples coated with potentially carcinogenic chemicals, when Europe takes steps to make sure their apples are safe?

It just isn’t fair. And it isn’t right. Please direct the Environmental Protection Agency to reassess the safety of DPA on our apples. Thank you.