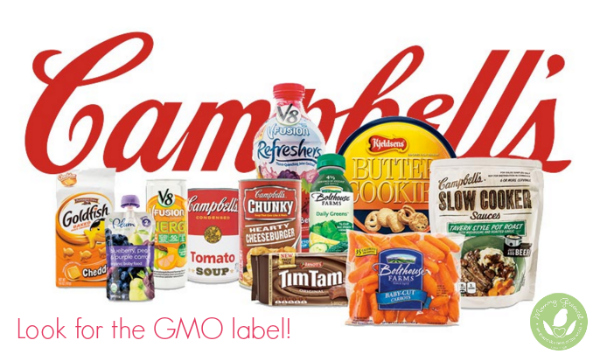 Talk about taking a stand. The Campbell company just announced they are moving towards GMO labeling, whether the federal government likes it or not. This makes Campbell the first major food company to stand up in favor of GMO labeling, which is now supported by nine out of 10 Americans, according to Just Label It. But that’s not all.

The company, which produces products under the Pepperidge Farm and Prego labels, among others, is also calling for federally mandated GMO labeling. In the meantime, they’re changing labels in preparation for a Vermont GMO labeling law that goes into effect this July.

“We’re optimistic that a federal solution can be reached in a reasonable amount of time,” said chief executive Denise Morrison in a New York Times interview. “But if that’s not the case, we’re preparing to label all our products across the portfolio.” The label shift is projected to take between a year and 18 months.

But unlike most companies, Campbell now opposes the Grocery Manufacturer’s Association, which is pushing for federally mandated voluntary GMO labeling, which will supercede state laws like Vermont’s.

According to a corporate statement posted by food activist Robyn O’Brien, “As a result of its decision to support mandatory national GMO labeling, Campbell will withdraw from all efforts led by coalitions and groups opposing such measures.”

I remember back when I was at Healthy Child Healthy World and the series of conversations that I had with Campbell’s director of sustainability, about phasing out BPA in cans. I had the sense then that they had their eyes on a big picture further down the road.

Today, Campbell hasn’t yet changed their cans, and they’re still standing by the ideas that genetically modified ingredients are “safe” and will “feed the world.” But it’s a start, right?

What We Need To Know About Sex Trafficking